"As an architect you design for the present with an awareness of the past for a future which is essentially unknown." 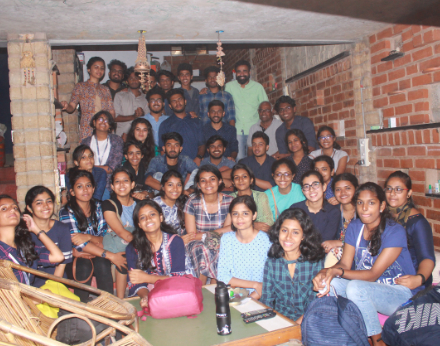 Study trip S1S2 A to ?Mysore and Bangalore February, 2019

“OPENED OUR EYES TO BEAUTIFUL MISTY MORNINGS, TH E SUNSHINE SHONE ON OUR SLEEPY FACES.AS WE LOOKED OUT OF OUR WINDOWS TO SEE FOUR-HORNED ANTELOPES PRANCING THROUGH THE FORESTS OF BANDHIPUR NATIONAL PARK, WE PREPARED OURSELVES TO PRANCE INTO THE HISTORY AND ARCHITECTURE OF THE CITY OF PALACES, MYSORE AND SLOWLY UNWIND IN THE BUSY STREETS OF THE PENSIONER’S PARADISE, BENGALURU…”

Mysore Palace or Mysore Maharaja Palace is one of the largest and most spectacular monuments in the country. Also known as Amba Vilas, it is located in the heart of the city of Mysore. The palace was initially built by the Wodeyar kings in the 14th century. Unfortunately, as it was made of out wood it got burnt down in 1897 during a royal wedding. The current palace construction was commissioned in 1897 and was completed by 1912. Designed by the famous British architect, Henry Irwin, it was built for the twenty-fourth Wodeyar Raja. It was the residence of the Wodeyar Maharaja’s of the Mysore State.

The current palace is built in Indo-Saracenic style and blends together Hindu, Muslim, Rajput and Gothic styles of architecture. The palace itself is a three-storey stone structure which has a series of square towers with arches covered with domes. There is also a large open space in front with an open courtyard in the center which is covered by a gold plated dome about 145 feet off the ground. A striking sculpture of Gajalakshmi, the goddess of wealth, prosperity, good luck is located above the central arch with her elephants. The palace is surrounded by a large garden. The palace houses a collection of exquisite carvings and works of art from all over the world.

The palace is now converted into a museum that is home to souvenirs, paintings, jewellery, royal costumes and other items which were once possessed by the Wodeyars.

The Mysore Zoo also known as Sri Chamarajendra Zoological Gardens was established in the year 1892. Mr G.H Krumbeigal, a German landscaper and horticulturist created the beautiful and attractive landscape.

The Zoo maps for about 78 acres including the Kensington Gardens and Thandisadak . The special feature exhibits meticulous planning, resorting in recreating the natural habitat for the different species. Instead of barred and fenced enclosures moated ones were provided.

The Zoo at present is housing 1450 specimens comprising of 168 species representing more than 25 countries .The place is very clean and visitor friendly and prioritises  maintenance of greenery and avoiding littering of plastic materials.

Our experience at the zoo reassured us about the scope of human capacity to help the dying flora and fauna. But it also made us wonder whether is it truly they who need to be put in cages.

Recognized as the second tallest church of Asia, St. Philomena's Church was constructed to pay tribute to the Catholic Saint and martyr of Roman Catholic Church, Saint Philomena. It is one of the most important historical sites in Mysore and is frequently visited by tourists from all over the country. The church is beautiful and one of the most distinctive landmarks of the city. It looks even more beautiful in the evening sky and is given religious importance having a Neo-Gothic style of architecture which makes it all the more famous amongst masses.

The foundation for the church was laid in the year 1933 by the then king of Mysore, Sri Krishnarajendra Wodeyar Bahadur IV for the European residents in the city. After the construction went on for about eight years, the church started functioning in the year 1941. The remains of Saint Philomena have been preserved here and are present even today.

Saint Philomena was the daughter of the monarch of Greece and had always been a devotee of God and believed in him. She was taken to meet the Emperor when she was 13 years old, after which, the Emperor on seeing her beauty offered to marry her. However, she refused and the emperor ordered to have her executed. The church stands as a symbol of the secular viewpoint and the religious accord of Mysore.

A must sightseeing place of a Mysore tour, Brindavan Garden mesmerizes everyone. It is located about 12km towards the north west of the Mysore city. Brindavan gardens with its illuminated fountains, botanical park, extensive varieties of plants and fulfilled boating, is place for everyone.

Especially famous for its symmetric design and illuminate terrace gardens, Brindavan Gardens was built by Sir Mirza Ismail, the then diwan of Mysore state. He was the brain behind its modelling and conceptualization. Spread across an area of more than 60 acres, this garden is laid out in three terraces, and ends in a horseshoe shape.

Primarily a terrace garden, Brindavan Gardens have been built in the complex of KRS Dam. The creation of these gardens began in the year of 1927, when the department of Horticulture started the work. It is said the work was completed in 1932. Brindavan Gardens have been designed by seeking inspiration from Shalimar Gardens of Kashmir, which have been created in the ancient Mughal style.

Chamundi hills can be viewed from a distance of 10km from all the corners of Mysore city. Chamundeshwari Temple is situated on top of the Chamundi hill, the temple is dedicated to Sree Chamundeshwari the deity of the Mysore royal family.

The Chamundi temple has always been patronised by the rulers of Mysore. They built 100 steps and huge Nandi which is the largest in India. The shrine was repaired in 1827 and built the present beautiful 40m 7 storied Gopuram with gold finials.

It is a serene place with an impressive layout. A lot of greenery and lovely gardens and a unique feature of the place is Dina Stupa or the 365 stone pillars that are spread across the ashram which signify the importance of each day in the calendar year. The deity of the ashram is Lord Dattatreia.

A large pond, herbal gardens and a temple dedicated to Lord Venkateshwara, SGS Hospital and a book shop are the other highlights of the ashram. The serene place celebrates a lot of festivals that include Maha Shivarathri, Navarathri and Dattarias Jayanthi.

HERITAGE CENTER AND AEROSPACE, 9:00 AM

This is India’s first aerospace museum. It offers a glimpse of India’s aeronautical history, exhibits include life sized models of aircraft form of photographs and the chance to use a flight simulator. It is exciting for kids and adults alike.

Sir gave us valuable advice on the importance of learning through loving. He pointed out how without a passion to know more, studying to be an architect is a wasted effort. He urged us to find interest in the simplest things from the field and to ignite a fire in our soul that only calms down with the knowledge you gain. He also talked to us about the concept and action of plan behind his residential two-story house in Bengaluru. He explained how his structure demands a kind of sense of symmetry and organisation even when he has experimented with it. His house really was one of a kind and his talk even more. This session gave meaning to our tour and put us all in a mood to achieve more and grow as architects, shaped for the future with lessons from their past.

OUR TOUR ENDED WITH A BLAST AFTER OUR LAST STOP AT THE VIBRANT AND ENCHANTING COMMERCIAL STREET IN BENGALURU, WHERE WE SHOPPED TILL WE DROPPED.

THE HAPPINESS AND CONTENTMENT FILLED US UP FROM THE OPPURTUNITIES THAT WERE PROVIDED TO US THROUGH THIS TOUR. THE ROARING SOUND OF MUSIC AND SOOTHING WIND AT NIGHT CREATED THE MOST PERFECT PARADOX FOR OUR EYES TO FEEL HEAVY AND SOON FALL ASLEEP. WE WOKE UP AT 9:00 AM IN THE BUSY STREETS OF OUR HOMETOWN, INSTANTLY MISSING THE BUSTLE OF BENGALURU AND THE SWEET PAK OF MYSORE. SURELY SUCH OPPURTUNITIES WILL COME OUR WAY AND WE WON’T HESITATE TO MAKE THE MOST OF THEM.