REPORT ON OCCURRENCE AND TREATMENT EFFICIENCY OF PHARMACEUTICALS IN LANDFILL LEACHATE 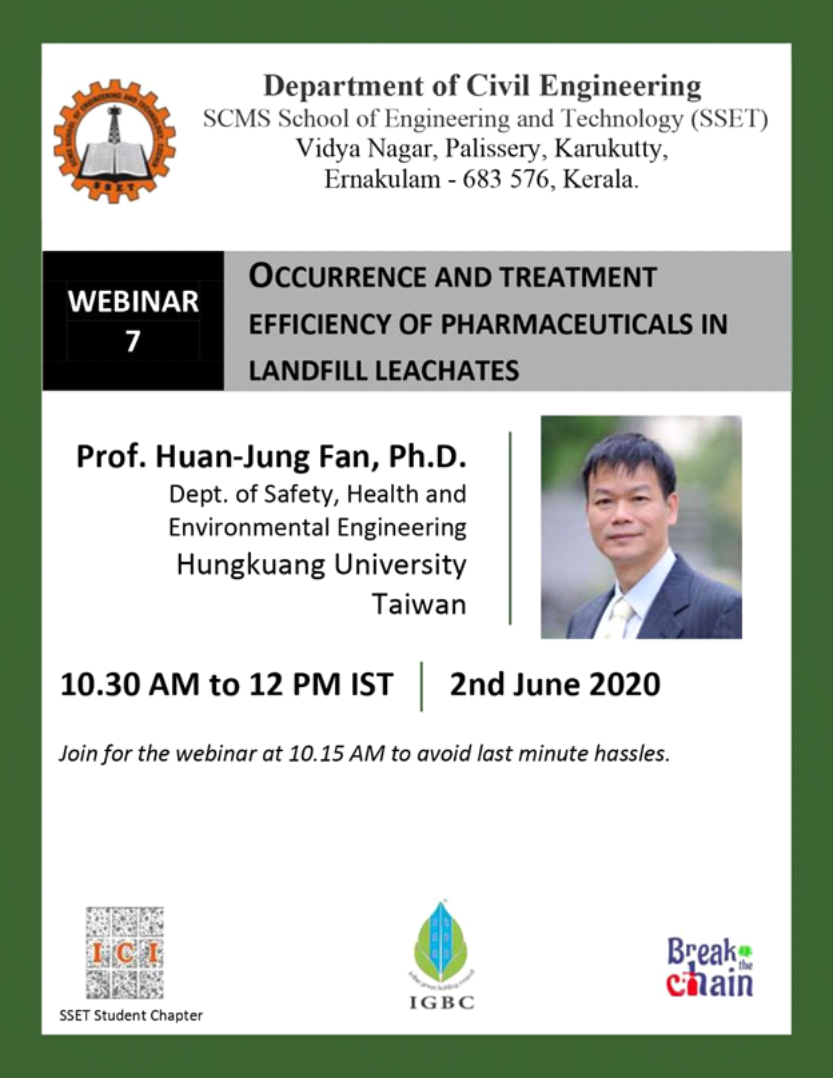 REPORT ON OCCURRENCE AND TREATMENT EFFICIENCY OF PHARMACEUTICALS IN LANDFILL LEACHATE

A webinar was organized by the Department of Civil Engineering, SSET on the topic “Occurrence and Treatment Efficiency of Pharmaceuticals in Landfill Leachate”. This session was handled by Prof. Huan-Juang Fan, Hungkuang University, Taiwan on June 2nd,2020. The online session began at 11am and was held through ZOOM attended by around 65 participants.

Prof. Fan began the session by speaking about municipal solid wastes generated and how it is being handled in Taiwan. They used 2 types of landfill: closed and simple landfills. Simple landfills were usually used for temporary disposal, while permanent landfills are closed ones with liners they were used as permanent landfills for disposal of municipal solid wastes. He explained about the leachates resulting in this landfills due to deposition of drugs in the fills. These drugs leach into the groundwater and contaminates the water table. The session mainly explained about the study conducted by Mr. Fan in Taichung area, for the study he considered 4 landfill sites in the area all are for disposal of municipal solid waste. The landfills include A1 which is a closed landfill for MSW, A2 where waste materials undergo incineration, then suburban landfill A3 and rural area landfill A4 and they monitored the leaching effects due to the pharmaceuticals deposited in this landfills in monitoring wells present both in the upstream and downstream of the landfills. He explained about the tests conducted for the water from monitoring wells like toxicology test, which was done using microtex model analyzer and Vibrio fischeri was used as the toxic indicator. The chemicals tested included ephedrine dichlofenac , FM2 , amphicillin etc. From the test it was seen that ketamine FM2, codeine, amphicillin and MDMA were more in the urban landfills and it was observed in the monitoring wells nearby the urban landfills. In rural landfills Diclofenac and amphetaminemou was more and it was observed in the wells. From the study they have concluded that pharmaceuticals cannot be removed, only 15% removal efficiency only existed for pharmaceuticals. Hence it was a major threat to the ground water as it caused contamination of the wells and which in turn causes toxic effects to the people using it

In the next part of the session he explained about the energy production in Taiwan. As per 2018, renewable energy was used only about 4.6% and they aim to make it up to 20% in 2025.The major sources of energy in Taichung area includes coal fired power plants, nuclear power plants and LNG. About 32% of energy was from LNG and 29% from coal but this lead to increase in pollution thus they are trying to shift to renewable sources of energy. As a part of this they are planning a 5.5GW offshore wind farm and Solar power of 20GW.

In short, the session helped the participants to gain information on adverse effects on the ground water table caused by the pharmaceuticals or drugs we simply put into the landfills.

Glimpses of the webinar: