WEBINAR ON STARTUPS - WHEN, WHERE AND HOW TO GET FUNDING

WEBINAR ON STARTUPS - WHEN, WHERE AND HOW TO GET FUNDING

We are moving into an era where entrepreneurs are coming up with various types of Startup Companies and are facing difficulty in acquiring funds/investments for the development and growth of their establishments. This was causing many Startups who had creative and ground breaking ideas to just vanish from the market. Startups and Innovation being the mantra among engineering students of the future, it was apposite to organize a webinar talk about the paradigms in the industry related to startups. So to develop knowledge on the financial aspect of raising investments for startups, the ARIME in collaboration with the ASME SSET Chapter (American Society of Mechanical Engineers) and the IEDC SSET Chapter organized a webinar on the topic “Startups - When, Where and How to get Funding” on the 8th May 2020.

The webinar was delivered by Mr. Anand T S, Mergers and Acquisitions, Paragon Holdings, Ireland and had an overwhelming response with 164 registrations out of which there were 84 participants during the webinar. The program witnessed the participation of 82 students and 2 faculty members from various departments of SSET. The webinar established a very formulated concept on how the new entrepreneurs need to face the issues in acquiring funds for their developing ventures and future endeavours. Mr. Anand wrapped up the webinar explaining the terms and jargons in the startup and venture capital industry and the resources from where the startups could acquire funding in a very easy to understand language even to the layman in the field. 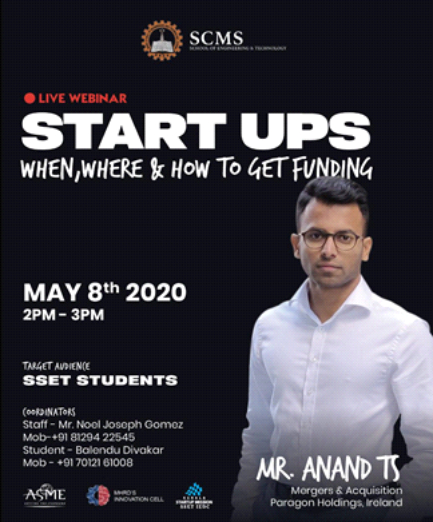